by ERIN KALEY | SEX AS PLAY

My First Makeout Session with a Girl

It was a Saturday night and we were headed out as a group in Downtown San Diego as usual. My German roommates went to the club and my friend and I were banished to a local bar that was less discerning of her fake ID. We took what we could get which meant we were at a bar with a bunch of boys we were not interested in and so I thought we’d set a boundary by telling said gentleman that we were lesbians.

Then she whispered into my ear, “They’re not going to believe us unless we show them. Let’s kiss.”

Well, my friends… that kiss turned into a full-blown makeout session that we performed all the way through Gaslamp Quarter. At the end of the night, we were standing in the middle of the street, a circle of at least 30 people gathered around us watching, when my German roommates realized the spectacle was us and plucked us out of the crowd and put us in a taxi home.

“Ummm. What is going on here girls?”, he asked. “I didn’t know you two were even into girls.”

Sidenote: It was at this point that I realized that I might actually also be into girls… but that confirmation would come later on 😉

As we pulled up the driveway, her and I sauntered off to my bedroom where we changed into our PJs. We were tipsy and flirty and just rolling around giggling – really just relishing in how much fun it was shocking the crowds of people. As I write this, the exhibitionist in my curiosity profile (love of being watched) definitely felt satisfied in this moment.

We were cuddled up chatting and one of my roommates took it upon himself to knock on my door to check on us and offer us a Mexican burrito. It was definitely his most clever moment – a smart man. She took one look at him, burrito in hand, turned to me, and whispered “Should we invite him into bed with us?”

I looked up to him and said, “Want to join us?”

Ladies and gents – I have never seen a man drop a burrito to the floor so fast. I swear, his clothes vanished from his body in milliseconds and he was in bed with us.

So, there we were – 3 people on my Queen-size double-height AIR MATTRESS (college kid vibes). They started making out, I started going down on her, he was laying in between us, rubbing both of our clits while we bit into his ear, she started riding him and I just remember finally surrendering to my alcohol-induced drowsiness, falling asleep at the foot of the bed as my body bounced with the rhythms of their thrusts. It was hot 🔥

It was messy, it was alcohol-induced, it was definitely not a super intimate moment BUT it opened me up to a curiosity I had not yet connected to – threesomes and maybe just maybe, was I bi-curious.

I told my financé this morning that I was going to share my favorite memory with all of you and he wanted a chance at guessing which moment it was – and he was right.

He still remembers the glowing of my eyes in the moment – like starbeams. When I tell you that sex is play, that it’s how we express ourselves, explore our edges, and feel fulfilled in the most orgasmic way… it’s moments like this that it really *clicks*.

We were in Chicago and my partner had matched with this gorgeous red-head. We thought it’d be fun to switch it up and take her out on a proper date instead of just drinks – which I highly suggest. It gave us time to flirt, share desires, connect deeper and really establish chemistry.

We all went to a comedy show together and loved laughing together, bonding over the dirty jokes, using them as conversation starters later.

It also helped me rev up my confidence for making the first move with her later because after the show and the nightcap, we told her how much we liked her and invited her up to our hotel room if she’d like – she did.

We went up to the room, we found ourselves sitting on the bed all talking, maybe a little nervous and so I got up, went to the bathroom and came out dressed in lingerie.

From there, it was a HOT sexy sweaty LOUD breathless blurrrrrrr. And this is when, my favorite ever spankbank memory came to be 😉

I was OUT of breath from doing goodness knows what, and pulled myself out of the tangle collapsing in the nearby chair beside the bed. She’d rolled over and crawled on all fours, letting her arms stretch out in front of her, ass up in the air.

He looked down at her, ravenous, and started thrusting into her – hard. I sat frozen in my chair, seeing him perform at an angle I would never have witnessed otherwise, watching her eyes roll into the back of her head, gripping the sheets BEGGING for more.

I still remember him looking over at me, winking and I, with my fingers deep inside me had the orgasm of a lifetime.

With lots of love, 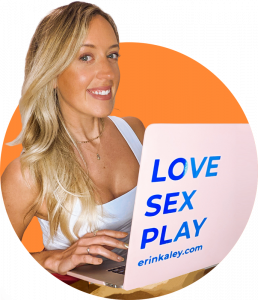 Have more FUN in life, your relationships, in the SHEETS 🔥 (or maybe... a sx party?)

Join me on this adventure of self-discovery, relationship design, sex as play, and shedding the shame, the head games, and the insecurities to explore FREELY!